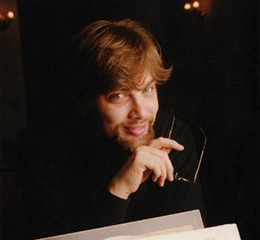 www.cembalo.it
Marco Vincenzi, organist and harpsichordist Verona, he graduated in 1984 with honors in Organ and Composition at the Conservatory of Verona under the guidance of Umberto Forni and M.o 1989 with honors in harpsichord at the Conservatory of Mantua under the guidance of Sergio M.o Vartolo. He has attended various courses of interpretation and improvement with the most important musicians: C. Tilney, T. Koopman for harpsichord music; J.L.G. Uriol, L.F. Tagliavini, W. Van De Pol for the repertoire ancient and baroque organ, J. Langlais for organ repertoire romantic and contemporary French. Interested in the practice of Gregorian chant, He followed in Cremona, under the guide of L. Agustoni e M.C. Billecocq, an in-depth course on this repertoire, its use and philological interpretation. He carries out intense concert activity both as a soloist and as a conductor and conductor in various baroque chamber ensembles, participating in major events (Ente Rocca di Spoleto, Lodoviciano Festival in Viadana, Teatro Olimpico in Vicenza, Fondazione Levi, Early Music Festival in Trento, Festival Monteverdi of Cremona, Bologna Ancient Bodies, Ente Lirico Arena di Verona…). He has performed throughout Italy and in various European countries, al “Baroque Music Festival” in Estonia, the Cervantino Festival in Mexico, Russia and the United States. Active in research, has always worked in the field of finding musical works from the eighteenth and nineteenth centuries with historical and musicological editions and publications, including in this also a specific interest in the organological aspect of musical practice, actively participating in the recovery of early keyboard instruments such as pianos and organs (“pianos”) and promoting the right repertoire to each specific tool. He has received accolades from critics and audiences everywhere, both for his executive technique and for his interpretative and expressive skills.. He has participated in television recordings (RAI and other local broadcasters), has to his credit recordings, both in training both as organ and harpsichord. He also participated in a documentary film (an Italian-French co-production) ARTE France: “Of love and war”, or the Combat of Tancredi and Clorinda by Monteverdi, directed di Ilinca Gheorghiu (Here's an excerpt from youtube.com). With his ensemble "MusicalIncanti" in 2009 he was the winner of the special record award of the Masi Foundation, as part of the Zinetti competition, for the Venetian civilization. He is an organist on the historic organ “De Lorenzi” Parish of Pescantina (VR). He has taught at the Conservatories of Music of Sassari, Adria, Rovigo, Power and Venice. Winner of the chair, he is currently professor of Harpsichord at the “E.F. Dall’Abaco "in Verona.
Giovanni Lazzaro – Luthier