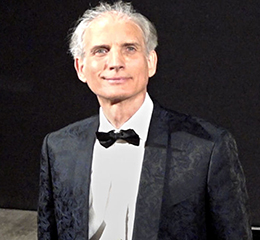 www.alessandrodrago.it
Alessandro Drago was musically formed, the Maestro School. G.Agosti, under whose guidance he graduated from the conservatory 'S. Cecilia 'in Rome. following, the precious encounter with Maestro. F. Zadar, which Drago was also assistant for three years in Lausanne (Switzerland), It puts him in contact with one of the most important international piano schools, that of V. Scaramuzza, teacher, among others, Martha Argerich, B. Leonardo Gelber, D. Bremboim. Of fundamental importance for his artistic refinement was the attendance of the seminars of "Phenomenology of Music", at the University of Mainz (Germany), led by the great conductor Sergiu Celibidache. After its premiere in Rome in 1982 during the Festival "Spring in Rome" with international pianists as Magaloff, yellow, Lonquich, Firckusny, Demus e Zadar, A. Drago has performed, with success, regularly in Italy and abroad. He played, solo, in various concert halls and festivals in Germany, Austria, Switzerland, Argentina, Japan, Russia, as well as the Philharmonic Society of Tallinn (Estonia), Riga (Latvia), Tbilisi (Georgia). In Russia also she gave recitals at the Moscow Conservatory, e, with the orchestra, in the great hall of the St. Petersburg Philharmonic. A. Dragon has recorded for major broadcasters (Radio Argentina, Russian and German Bayerische Rundfunk) and he participated in radio broadcasts of RAI and Radio Vaticana. From the '90s, He has joined the activity solo intense artistic collaboration with the quartet Rimsky-Korsakov St. Petersburg arches, as well as with German clarinettist Klaus Hampl, violist Alexei Popov and Russian cellists Luca Fiorentini and Francesco Sorrentino. A. Drago has performed on several occasions in Salzburg, in recitals and as a duo with cellist Robert Choi and violinist Luz Leskowitz. For many years he devoted himself with great passion to the training and education of young musicians, in Italy and abroad, also held courses and introductory seminars to the "Phenomenology of Music" at musical associations, the University of Sassari, and in some music academies with whom he taught. Currently A. Dragon is professor of piano at the Conservatory of Foggia.
Giovanni Lazzaro – Luthier Carlo Lazari – violinist