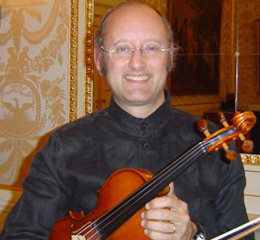 Biography
He starts very young to study violin with Emilio Cristinelli, tenor and orchestra at the Teatro La Fenice in Venice , student in turn of Joseph Priests, and after entering the Venice Conservatory in Renato Zanettovich's class, he is called to take part in the study and concert activities of the "Little Symphonia", string orchestra conducted by Sirio Piovesan. Soon after, following the meeting with the composer Claudio Ambrosini, joins the "Ex Novo Ensemble" in Venice, chamber group specialized in the repertoire of the '900 and contemporary. Scientific high school diploma, he attended for two years the orchestra qualification course at the Fiesole School of Music where he met Piero Farulli, with which he will continue his studies at the Chigiana Academy of Siena as the first violin of the "Malipiero" quartet, after obtaining a degree in violin with honors under the guidance of Renato Zanettovich. The study of the violin repertoire continues at the Accademia Stauffer in Cremona with Salvatore Accardo and at the Music School of Fiesole for nine years with Stefan Gheorghiu. He has also participated in masterclasses with Franco Gulli, and Henryk Szering in Siena and Nathan Milstein in Zurich. He was awarded first place at the 9th "A.Curci" International Violin Competition in Naples, during which he played the concerto by Ludwig Van Beethoven violin live on radio. Sounds steadily for more than 30 years with the Ex Novo Ensemble of Venice with which he has made numerous recordings with monographic programs of L.. Berio, F.Busoni, E.Casale, G.Donizetti, B.Maderna, G.F.Malipiero, G. Martucci, O. Respighi, G.Rossini, G.Sgambati, A.Schoenberg, C.Togni, E.Wolf-Ferrari, as well as works by A. Casella, I.Pizzetti and N.Rota for labels AS disc, Arts, ASV, Edip, Dynamic, Giulia records, Remember, Stradivarius. In duo with the pianist Stefano Gibellato he conducted a concert activity culminating in the recording of the 3 sonatas and 3 Morceaux de salon Anton Rubinstein for New Era. After working as a duo with pianist Anna Lazzarini, director of the "E. Wolf-Ferrari" music school in Venice. He is a member of the complex "The Italian Philharmonic Soloists" with whom he records for "Decca" and "Denon" and performs tours throughout the world. In terms philological, as a baroque violinist he has been busy for almost 20 years with the ensemble "L’Arte dell'Arco" ,Among the many performances stands out the complete recording of concertos by G. Tartini violin. He teaches violin and is currently a teacher at the Adria music conservatory.
Alessandro Drago – Pianist Jakub Tchorzewski – Pianist